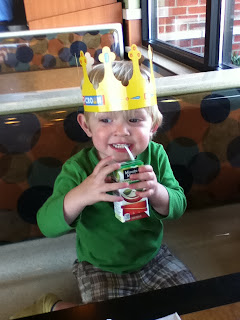 James went with me to my first appointment for the new baby. He wasn't THAT well-behaved and pulled almost everything out of my purse while I talked to the NP. He also created a dirty diaper- of course- which made the small appointment room seem even smaller. Nice. After the appointment we went to Burger King and James became the new BK. 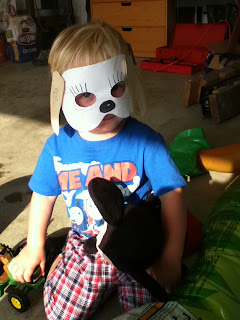 James made this doggy mask at school the other day. Apparently, he didnt want to take it off all afternoon and even when we got home that evening. We went for a walk around the neighborhood and he left it on that whole time. He finally allowed us to remove it for his bath that night. I was afraid I would have that weirdo kid that wanted to wear something bizarre all the time. Dodged that one!
Posted by Erin at 11:25 AM No comments:

My dad's (Pops) birthday was on May 9 so James recorded a short video to wish him a good one. I love technology!
Posted by Erin at 3:14 PM No comments:

A Belly Button For Your Birthday

Some may think it's cruel to schedule a child for surgery on the day after their birthday but I think when James grows up, he'll appreciate the belly button he got for his 2nd birthday. You see, when James' umbilical cord healed, it formed an umbilical granuloma (or what I referred to as a scar tissue kidney bean). Ha.
We've been discussing what to do with it since he was about 6 months old. He's had two ultra-sounds on it at Children's Hospital and a couple of consultations. Finally, last week, we had a pediatric surgeon at Vandy remove it. Below is a picture of James PRE-Op. You will notice, there are no post-op pictures...I'm sure you can guess why. James was put under full anesthesia but the surgery only lasted about 15 minutes. He was treated like a king at Vandy and after surgery had his choice of many fine treats including popsicles and ICEEs. I, of course, cried like a baby and blame it on the pregnancy hormones. It was hard to see him in that condition but by the time 2p rolled around that day, he was back to his old, wild self. No slowing this kid down for long.
Yesterday, the sterri strip fell off. I was nervous at first to see the final result but I when I finally looked, I was very pleased. And, I teared up again. He has a normal belly button! Happy 2nd Birthday James. 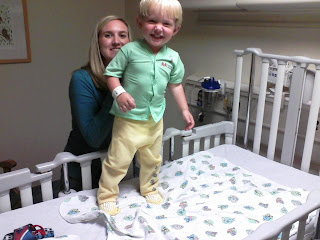 Two days before surgery, we had an actual birthday party for him. It was Thomas/James the train themed. His Grammy once again made his birthday cake and really outdid herself. Can you believe she made this? It tasted great as well. My friend, Emory, made him the most adorable train applique t-shirt which he adores. James loved blowing out the candle and we had to relight it about 4 times so he could keep blowing it out. He eventually let us cut into it so we could eat it. 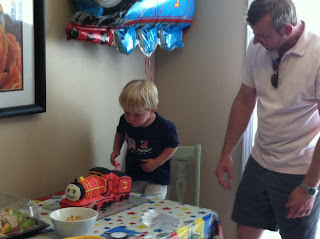 His real birthday present (aside from the new belly button) is a wooden swingset. His daddy and grandpa assembled it and we spend alot of our days swinging now. Here's a picture of James and his cousins at his birthday party enjoying the swingset. 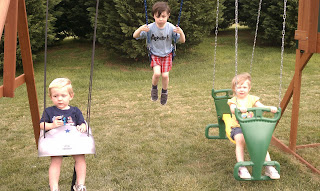 Superbowl is a big deal for guys (and some gals). Steve made sure to share that with James yesterday. James ended up having a great time at the "SUPA-bowl" party we went to and performed his own half time show. He has a "thing" for Madonna, I think. He stood about 5 inches from the TV and danced as if he was alone in the room. It...was...awesome! 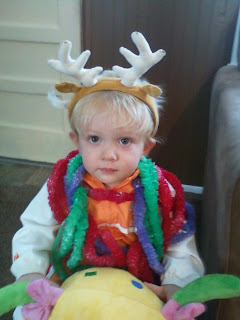 We had a luau themed birthday party for Steve a couple of weeks ago and James took a special interest in the leis. He wore all 8 of them for 3 days straight, nearly. He wore them to daycare and apparently had a fit at nap time when Mrs. Kay made him take them off. She placed them next to him while he slept and that helped calm the storm. That evening when I picked him up, the leis were back around his neck. I had to go to one of those little clinics because of a sinus infection and James came with me. He wore the leis with pride through Kroger and at the Little Clinic. He was quite the spectacle. I just wonder what other women thought about me!!! 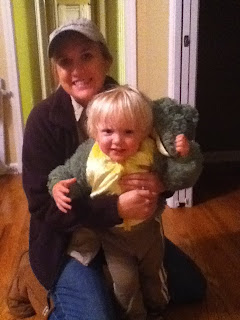 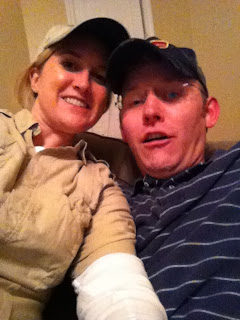 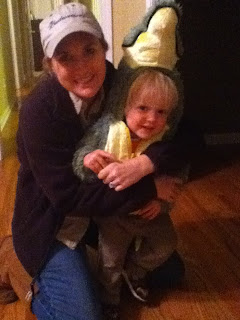 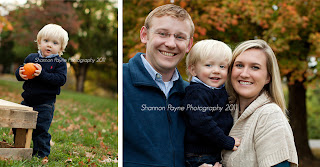 We had our first session of professional photography with James and I'm pleased to say that he cooperated. It was a mini session with Shannon Payne Photography (I highly recommend) so we had 30 minutes to make it happen. Here is a sneak peak.